Delicately handwritten, with the occasional misspelling or smearing of ink, the letters from the young Princess Elizabeth offer insight into the carefree early life of a girl who never expected to become queen.

The now historical documents were written in the 1930s to the one and only friend the future queen chose for herself as a child, Sonia Graham-Hodgson, and along with some charming and candid photos, they are now cherished family keepsakes.

The wonderful friendship with the girls playing hopscotch and hide-and-seek began in the private garden near their homes in central London, and has lasted for decades. Whenever she stays in royal residences across the country, the young Princess Elizabeth, better known as “Lilibet,” keeps up a lively correspondence with her dear friend, with letters showing her early obsession with horses, even from the assortment of toys.

One letter, written when she was 10, shows her interest in “Ben,” her favorite toy pony, which she and Sonia left as the family moved to Buckingham Palace after her uncle Edward VIII abdicated, making her father King George VI. .

Writing on Palace’s notebook on March 7, 1937, she thanked Sonia for taking care of Ben. 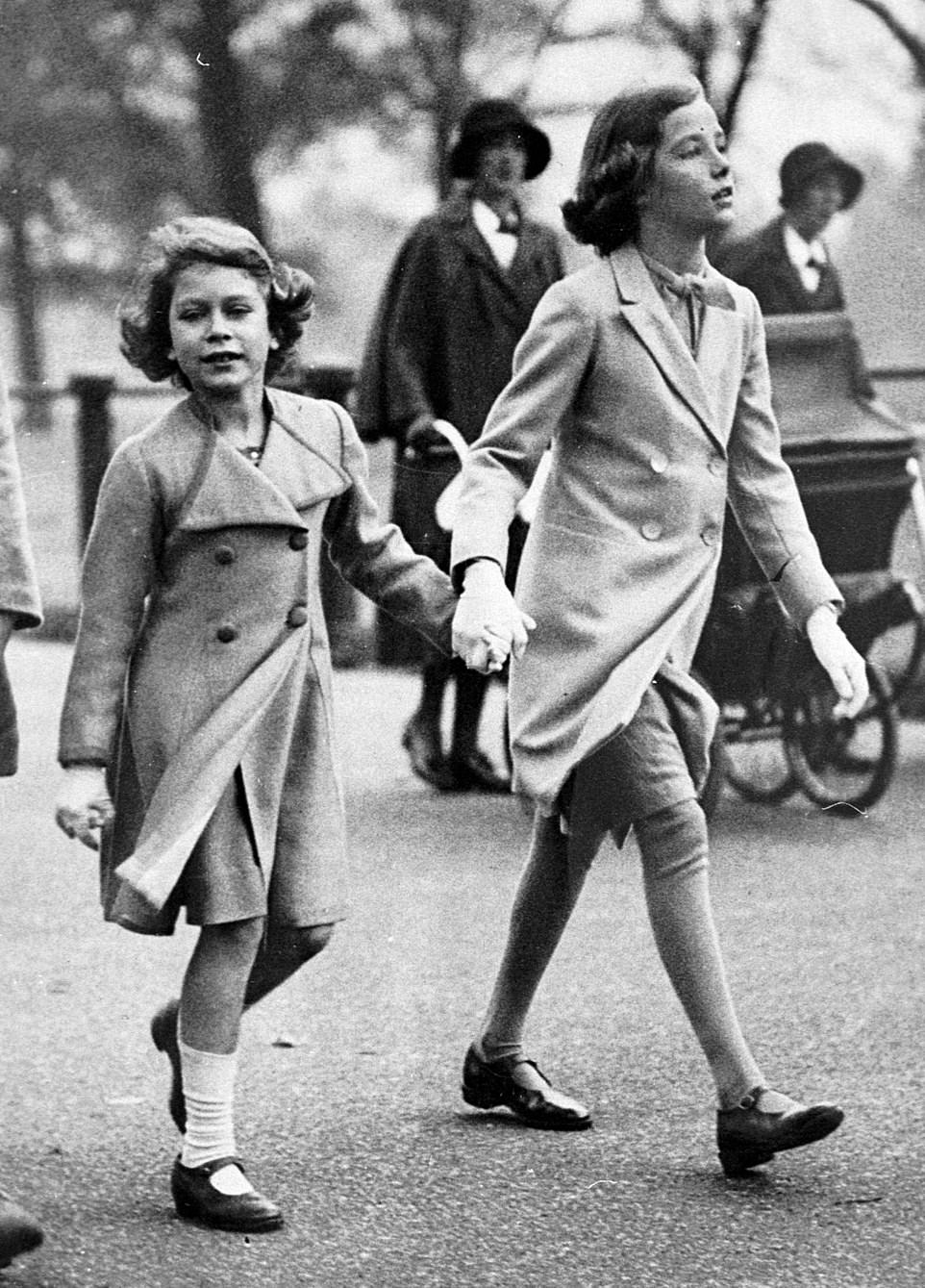 The wonderful friendship began when Princess Elizabeth (left) suddenly ran up to Sonya (right) – the daughter of prominent radiologist Harold Graham Hodgson – in Hamilton Gardens, Piccadilly, and asked her if she wanted to play 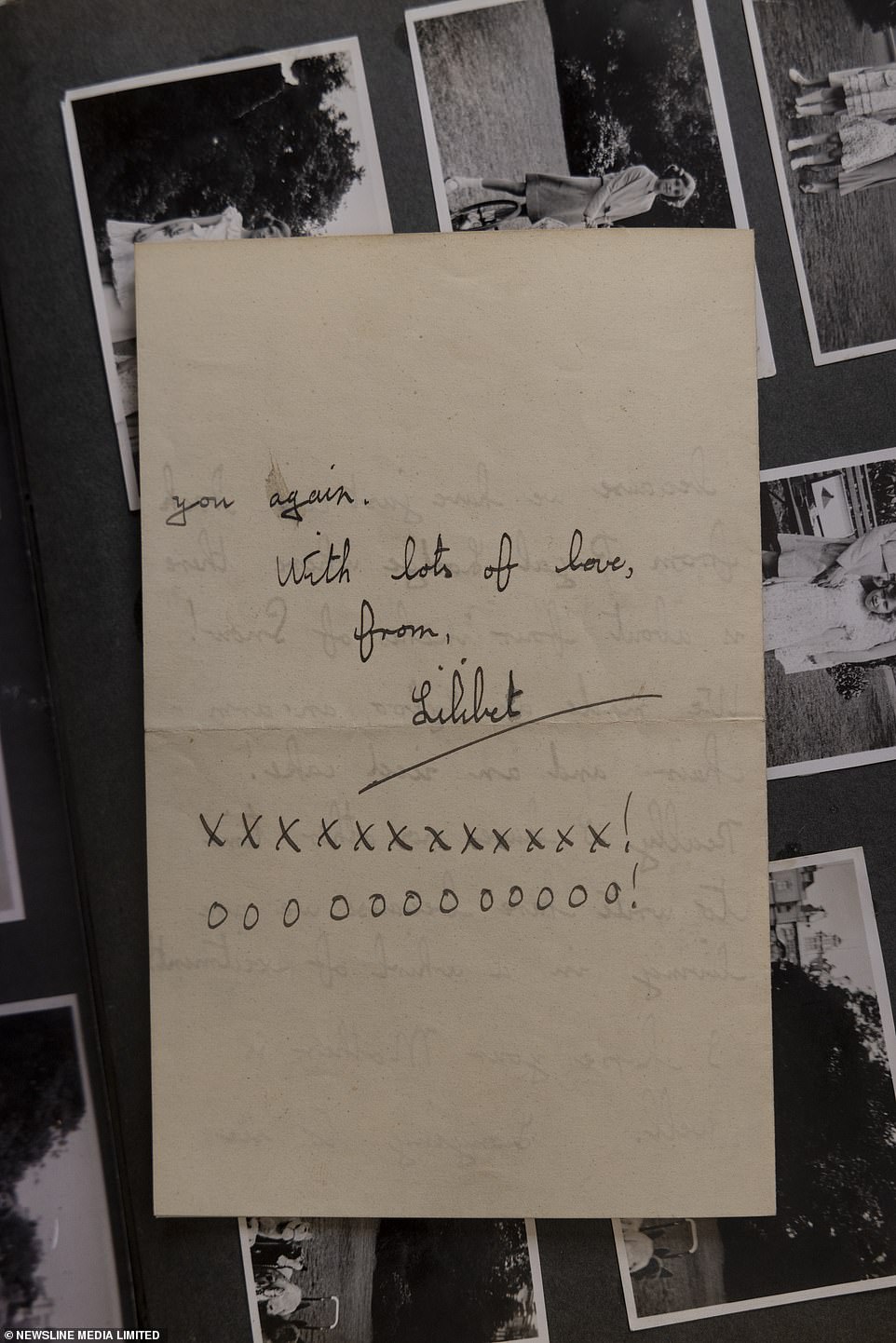 Whenever she stays in royal residences across the country, the young Princess Elizabeth, better known as “Lilibet,” keeps up a lively correspondence with her dear friend. 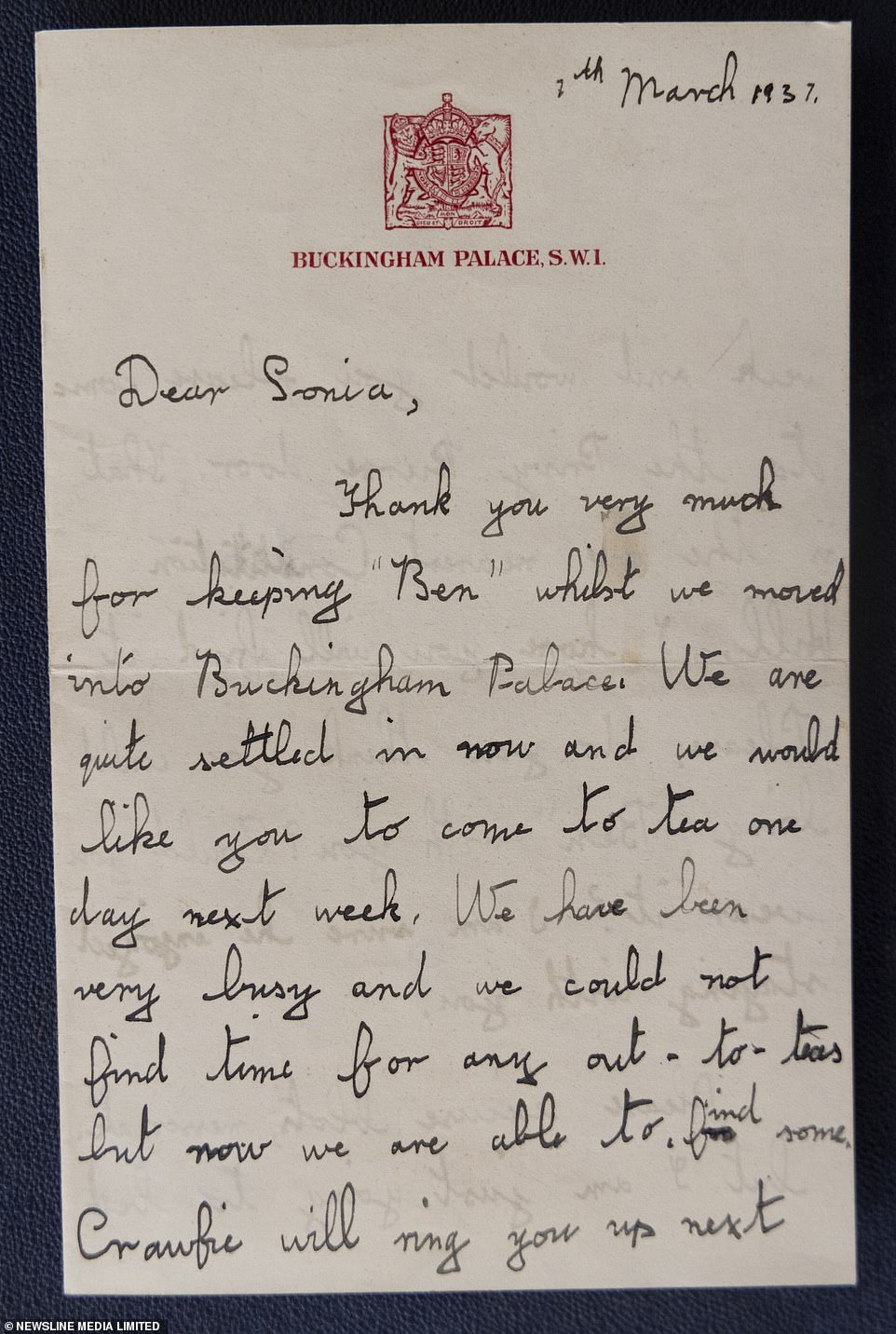 One letter, written when she was 10, shows her interest in “Ben,” her favorite toy pony, which she and Sonia left as the family moved to Buckingham Palace after her uncle Edward VIII abdicated, making her father King George VI.

“Please, do you think you can bring ‘Ben’ with you? Can you afford it? I’m sure he enjoyed staying with you,” asked little Lillipet, inviting her friend for tea.

She asked her friend to justify any “stains, messes etc” as the letter was hastily written after a busy day enjoying the snow at the Royal Lodge. “We made a little hut, an armchair, and an icing cake,” she says excitedly. The reunion apparently did not take place, and another letter in April 1937, this time from Windsor Castle, asks Sonya to send Ben to London in a paper parcel…I don’t think he’d mind it being wrapped. Little bit, right?

Three years earlier, on September 14, 1934, the eight-year-old princess wrote to Sonya of Birkhall, at the Balmoral estate, where she was staying with her parents and sister, Margaret, telling her friend all about her new ‘sister’. The pony is called Pixie and she is going on picnics with her mother.

But it wasn’t all rosy at Royal Deeside as Elizabeth spoke of holding a funeral for a dead Robin found in the grounds. The future queen wrote: “We dug a hole and filled it with rose petals and flowers, covered it and put blue flowers around the tomb.” 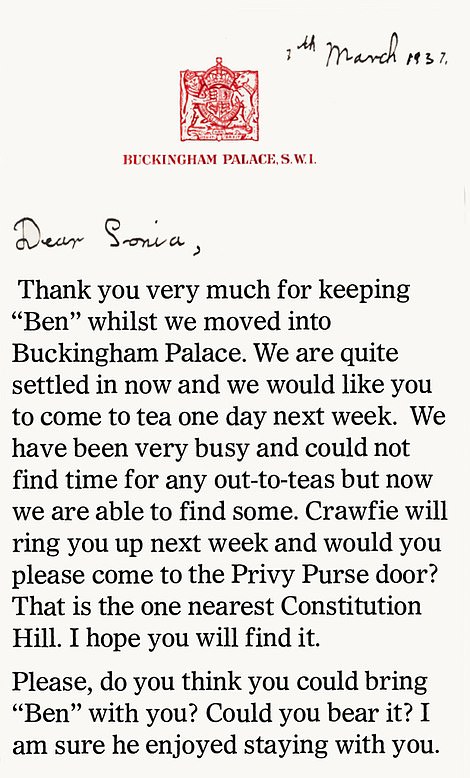 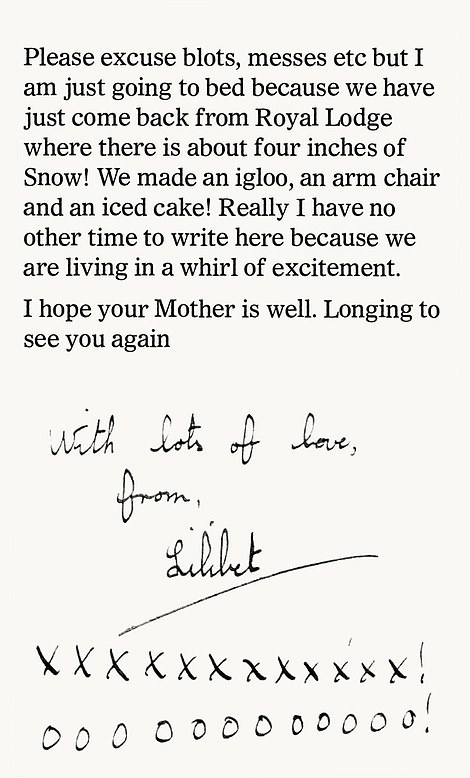 Elizabeth asked her friend to excuse any “stains, messes etc” as the letter was hastily written after a busy day enjoying the snow at Royal Lodge 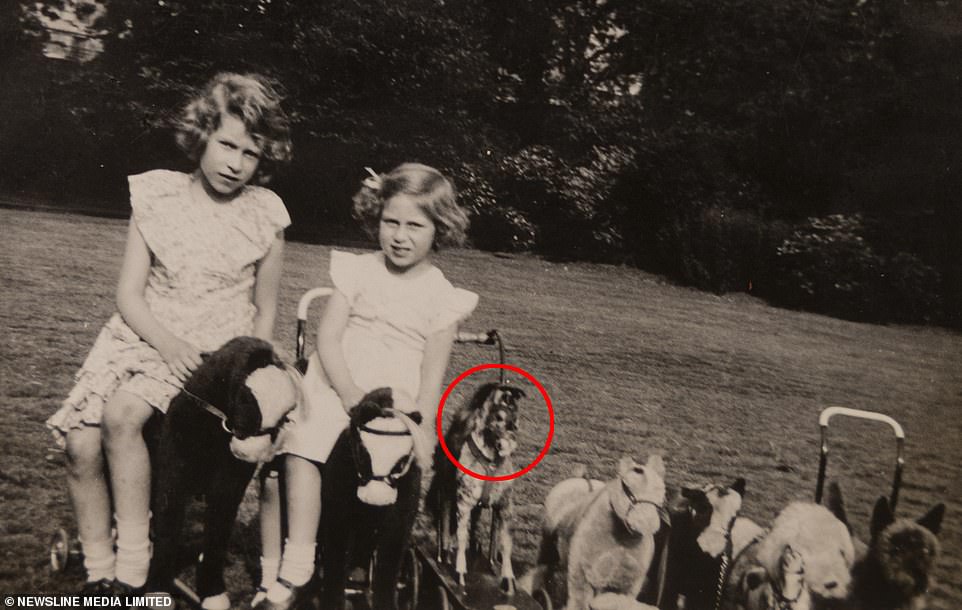 The girls did not meet each other during World War II, but after that they continued to meet and correspond until Sonia’s death in 2012, at the age of 86. At this point she was known by her married name Perry.

Sonia’s daughter, Victoria De Anners Willis, said yesterday: ‘They communicated really well and seemed to just click. They saw each other as often as they could and texted until my mother died.

It was a remarkably enduring friendship that began when five-year-old Princess Elizabeth suddenly arrived at Sonya – the daughter of prominent radiologist Harold Graham Hodgson – in Hamilton Gardens, Piccadilly, and asked her if she wanted to play.

They shared dance and skate lessons, dined at each other’s homes and attended the Brownies and Girl Guides together. In later years, the princess and her then-fiancé, Lieutenant Philip Mountbatten, attended Sonia’s 21st birthday party and was in turn a guest at their 1947 wedding at Westminster Abbey.

Mrs. Danielle Willis remembered how the Queen was a frequent visitor to their family home when she was growing up. ‘The first time I met the Queen at our house in London,’ she said, ‘I was five and my brother was three.’ I can remember having a day off at school, which was so exciting, he was practicing his bow and I was practicing my pronunciation. I remember looking out the window until she arrived because I thought she was going to wear a crown. They weren’t, which was disappointing. 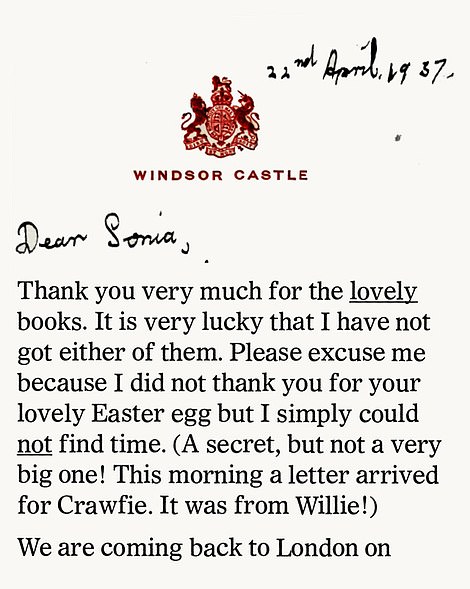 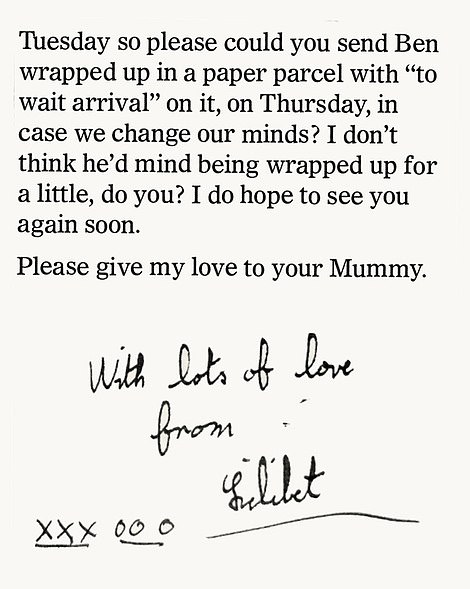 The Queen makes another attempt to be reunited with her pony game, after she thanks Sonya for her gifts and mentions some correspondence between her nanny, Crowe, and Sonya, Willie. 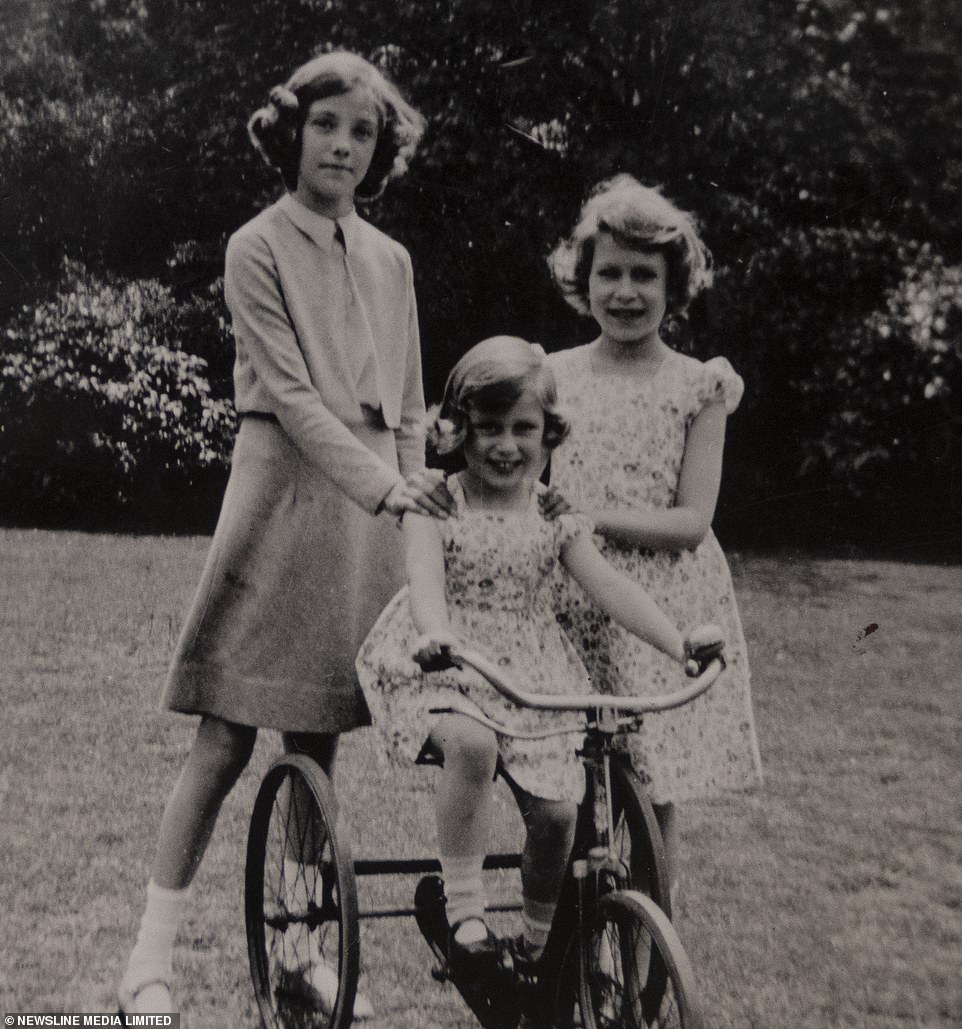 Sonya (left) and Elizabeth (right, with Margaret on the tricycle) shared dance and skate lessons, dined at each other’s homes and attended brownies and Girl Guides together

Our best apron and dress were brought to meet her, and my brother bent down so low that he almost fell into her lap. It was so funny because she suddenly said, “Be careful” and supported him before he actually landed on her.

As we got older, she would sometimes come to dinner parties too, but I didn’t go to those parties because they were just for my mom’s friends. Instead, I had dinner with the detective in the kitchen.

Thanks to my mother’s lifelong friendship with her, we were fortunate to see a more relaxed side of the Queen.

My mother was a kind, generous and upright person, like Her Majesty.

‘I feel very nostalgic when I look at them, I know how much they love each other and that the Queen is now gone too,’ she said, browsing through her mother’s scrapbook and photos. She was my mother’s last surviving friend and I know she was 96 but it was still a shock. It definitely feels like the end of an era. I am so proud that my mother was a part of it. 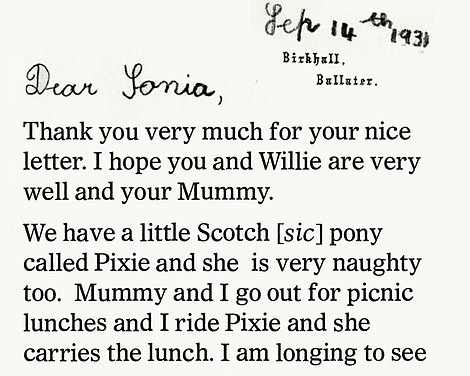 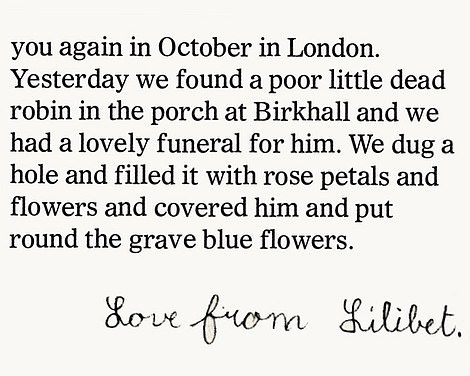 The eight-year-old princess from Scotland tells Sonya about her foal and a dead bird in a handwritten letter that we reproduced in writing. 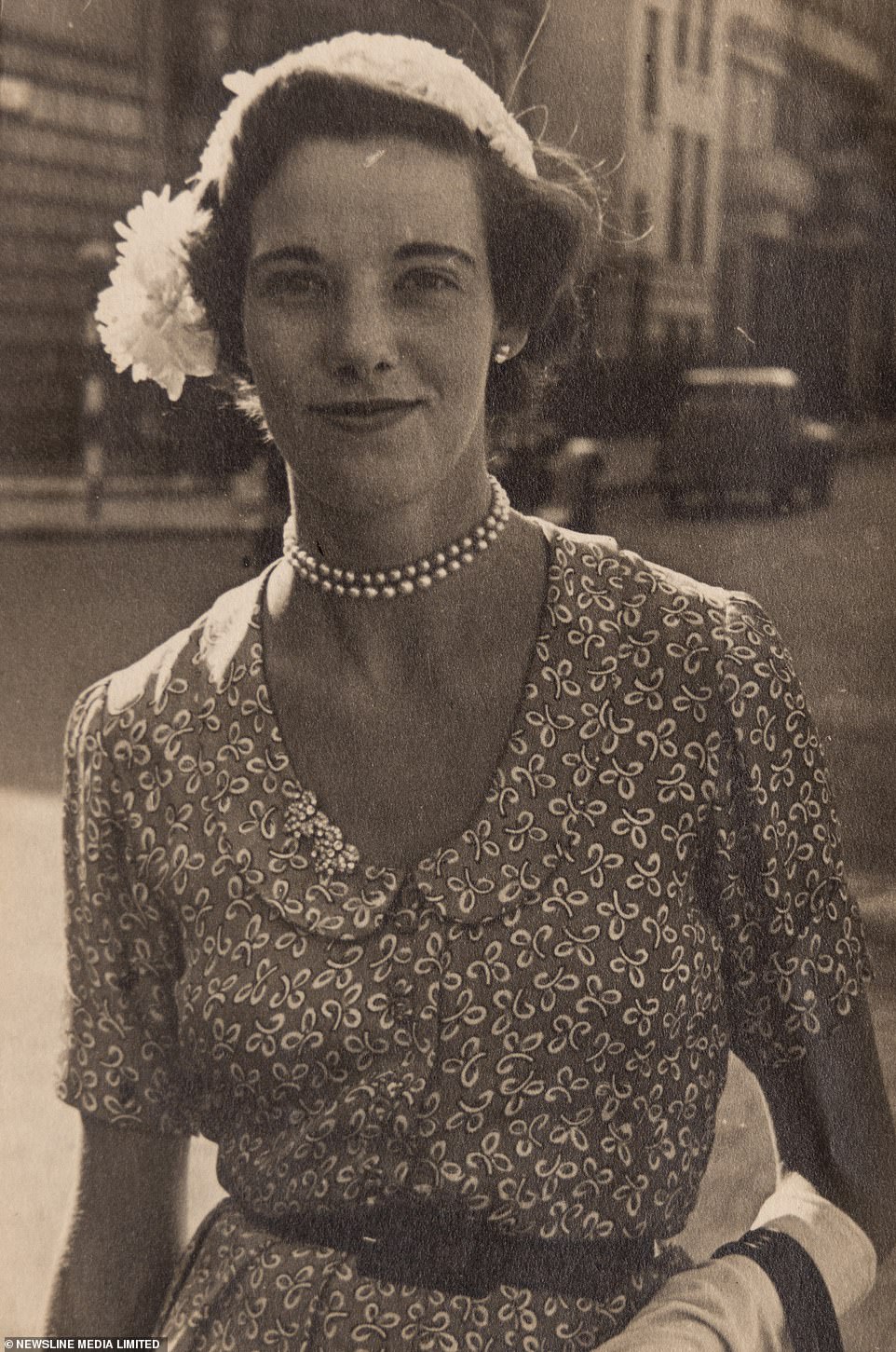 Sonia (pictured) remained friends with the Queen into adulthood and was a guest at Elizabeth and Philip’s wedding in 1947 at Westminster Abbey.